Courage often skips a generation. And often, it comes back from unexpected places.

I spoke these words to my then girlfriend, very skeptical that a God who could split the Red Sea could grant such a bizarre request. We had just talked of the possibility of marriage. We were both very serious with each other and we did not desire to waste each other’s time. Waturi was waiting for my response. She wasn’t getting any younger and she wasn’t ready to date for ten years; neither was I.

We were 19, madly in love and full of ambition. I didn’t doubt the love we had for each other nor the ambition. The age just made the latter seem an invincible feat. We were sophomores in campus who each lived on roughly 10 dollars a week. We depended on our parents and we could hardly pay our own hostel rent. Sure, we had part time jobs teaching at a nearby primary school. She and I each earned 12,000sh from the school for the spare time we spent teaching. Still, where would a car come from? A car in 2010? It was my cowardly version of saying, “This won’t work.” For me, praying for a car was one of those requests that fell in the same category as, “I want to marry Halle Berry.” Or so I thought. I went home that day and decided to take up the challenge of faith. Since when did any request become too simple for the maker of the galaxy? I decided to believe that He could do it even without seeing how. I wrote Turi a letter and told her to pray for God to give either one of us a car before 2010 ended.

It was the kind of feeling that simultaneously made sense and felt strange because nothing’s too big for Jesus and it was all very new respectively. It was the first sign of many that led to our wedding anniversary on September 1st 2012.

But this is no fairy tale. And for those that deem it such, it may be to your romantic demise that the evil witches and the scary dragons do exist before you can kiss the princess and marry her. Our enemy, fallen Lucifer, prowls around like a roaring lion, seeking someone to devour. To align yourself to the work of Christ has a heavy cost. It isn’t a popular path but it is the right path beloved. Schemes of men too are common in that path less travelled by this generation. I pray that this post may be of encouragement to any who fear to respond to a call from Christ.

When I placed the ring on Turi’s finger, it was like the eye of Sauron sensed we were approaching Mordor. The attacks came out in scores and like Lord of the Rings, we were outnumbered. When asked why, It wasn’t easy to explain how Christ had put it in my heart to take this course so I responded with an equally “why not?” The relationship was of age for marital convenience. It was the kind of response that satisfied the common person. But there was more to it and failure to reveal it brought resistance. I knew deep down, the resistance would be faced even if genuine responses were availed. Christ opened my mind and heart to see which battles to pick and which to leave. They were but obstacles. My focus had to be on the impression etched in my spirit to continue. This met equal resistance.

The first kind of opposition was routed from a common plague in our country. Tribalism. The idea that to marry from another tribe is betrayal to your own kind was not foreign to us. It was clear that some of our tribes-people were sick with the idea. Christ strengthened us to withstand. The bitterness in their words weighed me down. Yet somehow, Turi and I survived it. Fear and evil schemes come in aggression. Be gentle and show respect. It’s the way Christ would do it. It won over many who could not believe that Turi and I were ready to disown our tribes at the expense of owning God’s purpose for us.

The opposition became personal. Friends got upset that I did not inform them I was going to propose to Turi. One in particular said she would not attend our wedding. Another became cross with us because we did not select them to be in the bridal line-up. Another lied to Turi’s father and uncles about me. The results were dire to the extent that the wedding was almost cancelled.  Another came to help in the wedding preparations and caused much heartache. She gathered information and spoke ill of us and my family during the preparation. Another spoke ill of our families and yet laughed with us telling us congratulations all the while. The Lord watches over his children and brought to light all the secret deeds. He showed us who to avoid and who not to connect with. A week before the wedding, another lied to us about doing Turi’s hair for free. She promised to give Turi a free hair treatment worth 50,000kes. On the day of payment, she would not turn up and cause us to incur debt. It would be her way to settle a personal score. But praise be to Jesus who showed us her devious heart. Before Turi did her hair, the hairdresser felt she shouldn’t start. Christ warned us that the lady had ill motives. We heeded and found out it was true. We did not fall prey to her evil scheme and had a beautiful bride with flowing hair on September 1st 2012. Evil schemes seem to prevail but our God never fails. Wicked men plot but they plot in vain because the Lord is against them. I was shocked at the enmity caused by a silver band around my fiancée’s finger. Yet God encourages, protects and honours those that follow him. Not because they are worthy

All those things may seem casual in wedding preparations but the enemy can make their gravity so grand that it breaks your heart. And when it does, you had better forgive them because if you do not, the enemy succeeds. He slows you down with a heavy heart. You lose focus on the goal and start fighting battles you were not made for. 1st Thessalonians 4:6b says, “The Lord is an avenger.” In the NIV it says “…no one should wrong his brother or take advantage of him. The Lord will punish men for all such sins, as we have already told you and warned you.”

After it all, Turi and I prayed for each person that tried to frustrate us. We prayed for God’s mercy in their lives, for in their ignorance, they were opposing Christ.  And if you are a follower of Christ, recognize that when evil men plot against you, they plot against Jesus. And Christ’s revenge for them is love. Yes you heard me right. Love. You may wonder, how can He love them after they tried to ruin me? It’s simple. Same way he loved you when you did not deserve eternal life. You need to understand that when the Lord says vengeance is mine, it is a statement of love; he avenged all evil on that cross when he died for our sins. So, the perfect revenge God would want to see for a lady who tries to ruin the bride’s hair is that she comes to the realization of God’s love and not fall victim to her insecurity and jealousy. The perfect revenge for a man that schemes to ruin a relationship is that he may fall at the feet of the cross and give his life to Christ. This is our God.

If you cast your hurt, your pain and struggles for him to handle, you will succeed. It was hard to forgive but when we did, we moved faster that before. Evil schemes can turn into your good fortune with Christ in control. Turi and I met in the park to pray each time we hit a snag. The power of communion with God never felt more necessary in my life. 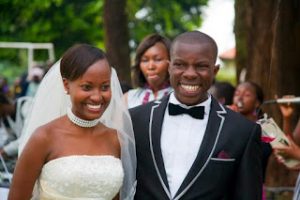 God’s blessings have been grand in my life but I believe the costs have been grand too. They are worthy costs. In this generation, the courage to do the right thing must return. So I would like to instill courage to many young people all over the world in two areas by the grace of God. One. Pursue purity. When I told a friend of mine that Turi and I waited for sex until marriage, they refused to believe me. To them it is impossible to date for three years in the 21st century and marry having not had it. Yet, It became something to disdain as opposed to appreciate. Our generation glorifies the wrong things and we should not be okay with it. I encourage those who may face evil words and schemes regarding honouring God’s covenant of sex till marriage. Stand firm. It is worth the wait! When I proposed to Turi and faced a lot of opposition, few said to forget the wedding and have her move in with me. After all, everyone is doing it. To say no meant to be laughed at and regarded silly for doing it as Christ would want it. Believe me, fight for it. It is worth the wait. And if you have already compromised that area, fear not for Christ is the one that enables us to wait for marriage, not ourselves. You are not less worthy because of it. Turi and I had the hots for each other, we keep saying it is a wonder we made it. We are not worthy; we are just forgiven and favoured in obedience. He regards all past as past if you confess. He forgives and he gives you a new chance. Start pursuing it today.

Secondly I encourage those that wait on the Lord, faithfully reading the Bible, his word. Apply it and be not ashamed. Hold fast; He’s coming to save the day. You are not out of reach.

Isaiah 41:10 “So do not fear, for I am with you; do not be dismayed, for I am your God. I will strengthen you and help you; I will uphold you with my righteous right hand.” (NIV)

Previous ArticleWhen waiting is wearying
Next Article The Gospel for the I.T. guy!