Title: The Software of Sex

Sub-title: Most Talked About, Least Understood

Ken Aringo, a man whom I greatly admire has written a book on sex! He is one of the men I acknowledged in the previous blog for giving his time and resources to build the youth ministry in this country. Ken Aringo writing about sex may not seem like anything worth celebrating, but for the Kenyan church, it definitely is. Why? Well, firstly, the youth are nearly 70% of the Kenyan population but many institutions treat them as if they are a minority. A nation that ignores its youth ignores its future. Secondly, Ken is an ordained priest of the Anglican Church of Kenya, serving in Nairobi Diocese. In our country, it is often assumed (and rightly so at times) that the clergy and the topic of sex do not mix well. And some local history will teach us that whenever some try to address the sexual quandaries of our generation, there is more hurt than healing achieved. In short, Kenyans generally don’t see the church as an authority or solution to sexual problems. Ken Aringo is riding the tide that is changing this long-held belief by many Kenyans. But I would be unfair to say that he alone is at the forefront in this. Several churches, campus Christian Unions and bible studies I have visited are tackling this issue with more boldness than before. I would run out of blog space to mention them and elaborate their work. Sex is slowly edging out as a taboo topic of the pulpit. Ken and many like him have had their fill of radio hosts dictating the current of this topic. The sleeping giant is awakening. When I wrote my book, Lust and the City, it was my prayer that God would raise more Christian Kenyan authors to write and speak professionally, excitingly, intelligently and spiritually on a matter that is clearly paralyzing our nation. For me, Ken is an answered prayer.

Ken’s message is simple yet potent: sexual debacles do not arise from the fire in our loins or the itches in our crotches. They arise from the mind. Reverend Aringo awakens us to the fact that sex never just happens. “It might seem shocking,” he says, “but sexual temptations are usually well rehearsed and prepared for. We live them in our minds long before the actual events take place. He continues to illustrate, “The auditions are taken and suitable candidates found and signed up. The rehearsals begin in earnest and it is only a matter of time before the actual scenes play themselves in real life.” Ken is enlightening us to the idea that we had sex long before we took our clothes off. And the organs aren’t to blame; the mind is. The mind is the greatest sex organ. Our physical sexual organs are simply low-ranking soldiers out in the field executing orders from the Commander, the mind! If they fail in the war, it isn’t primarily because they were not well trained. No. It is because they acted on faulty orders.  The buck stops with the Commander. This book reminds us that sex issues are solved at the mind level and not at the mid-section level of our bodies. Our bodies are the hardware of sex. But our minds are the software. While the hardware can have complications that contribute to sexual issues, it accounts for an insignificant amount compared to the contribution of a corrupted software. Peter Kreeft, whom Ken quotes, sums it best. He says, “The body is a dumb and innocent little donkey, The worst that can be said of it is lazy and stubborn at times. It is his rider, Thought, who keeps turning him wrong.”

In two chapters of the book, Ken gives the testimonies of a few girls he counselled, who grew up in relatively sexually safe environments but ended up spiralling into promiscuous lives. One of the girl’s issues can be clearly traced from a poor parenting model by her mother and especially her father. The other girl, despite having good godly parents, still suffered the same fate. The stories embed the idea that external factors are not primarily to blame for the pornography, abortions, fornications, adulteries and sexual perversions of our time. The problem is not out there; it is in here. Jesus affirmed in Mark chapter 7 that the evil in the world does not exist somewhere out there, waiting for a hero to destroy it. No. The problem, Jesus affirmed, is in our sinful hearts. The ISIS terrorist and the masturbating campus student have the same problem-a sinful heart. Jesus taught that when we bow down to the evil, it comes out of us and it makes us unclean.  Even the lustful entertainment that we download into our minds becomes a problem, not primarily because it exists, but because it is consumed. If the mind can change, the man can change. If the man can change, the family can change. If the family can change, the country can change. If the country can change, the world can change. To change the world, change your mind. Ken affirms in the recollection of his counselling interviews that sexual struggles that are fought at the fruit-level and not the root-level are a lost cause. They will ravage us until we are left for dead.

The book also celebrates sex! It is not all gloom and doom. Ken dedicates a portion of the book to biological and scientific truths of sex. He also dedicates the last chapter to the spiritual truths of the gift of sex. As I read his book, I remembered how the scriptures call husbands to enjoy the breasts of their wives in Proverbs 5:18-19. The context and content of those verses are both pure and literal! Solomon is not talking about spiritual breasts that give spiritual milk for the edification of the church. No. He is talking of an exhilarating and erotic experience that a man ought to share with his woman once they are married. It is a gift from God. And it is not only for the men to enjoy. The book of Songs of Solomon speaks of the woman longing for the kisses of the mouth of her husband that are better than wine. Sex is a gift from God and the scriptures do not shy from it. In the last chapter, Ken builds a case for marriage and the importance it holds to contain the gift of sex. We learn that flames within a fireplace serve us, but in a conflagration in the forest, they hurt us. Marriage is the fireplace. The flames can be stoked incessantly and the fire will not burn- it will only warm. Any other place but marriage is the forest. The flames here can be doused incessantly but they will never warm- they will burn and consume with unknown end.

The book’s language is very respectful. It is also a very well written book. You will laugh at the author’s pleasant humour and you will undoubtedly be impressed by the simple yet rich expression of the English language. 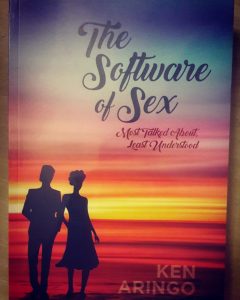 We all judge a book by its cover. Ken’s book has a good cover. The silhouettes of the man and woman on the cover bespeak the subtitle of the book- Most talked about, least understood. Kudos to the designer. The interior is better. Off-white pages, legible fonts thanks to the serifs, good spacing and neat InDesign work. In a country where many Christian titles are accused of poor quality, Ken Aringo’s book refuses to join that club vehemently.

I recommend the book to anyone in chronic sexual addictions. It also serves as a great research book for anyone writing a paper on the topic. I would rate the book PG for teenagers. This book would do well to start the sex conversation between parents and their teenagers. However, I would recommend most of our conservative parents to read it first. Some parents get shocked at the reality on the ground and decide to put their teenagers under a lonely rock, for fear they may create arousal instead of education. The difference is not based on the content, but on our approach of the matter. You can purchase THE SOFTWARE OF SEX at Keswick bookshop. It retails for only 1000 KES (10 USD). Visit Aringo’s website www.kenaringo.com to keep up with his latest book launches and speaking engagements.

Previous ArticleBetween the Pulpit and the Stage: The battle for a lost generation
Next Article SEX IS SACRED