Latest
Search
My Account   Checkout   Shopping Cart
HomeChristian Living
By Ernest Wamboye on May 10, 2012 Christian Living True Stories
When I began my origami business in 2011, I dared to approach established people to seek opportunities to work with them. I once approached the CEO of a design company and asked him if he would be interested in the paper art. He agreed and asked me to see him the following week. I was held up because of a huge project my organization was conducting that week. I wasn’t able to see him. However, the following week, I popped into his office to explain myself and to apologize for not communicating. The reception was a shock. As I was ushered into his office by one of his workers, he stood up and addressed me at the entrance.

He might as well have slapped me in the face. I knew I had made a mistake but it felt like I had masterminded
9/11. I tried to negotiate.

“I’m sorry I didn’t make it last week. We had the Strategic plan meeting and…”

“I don’t want to hear you excuses,” he interrupted. “Listen to me young man. I am a serious business man and I work with serious individuals. I don’t have time to waste with you. Now you’re wasting my time. Get out of my office!”

He laughed. He was considering? No, he was mocking me.

He stretched his hand to the door handle and repeated. “Get out!” 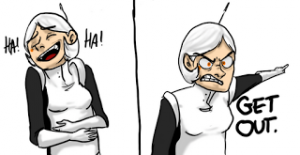 The origami animals in my little box looked at me in shame. I had let them down. I had let myself down. The man had taken me apart, humiliated me beyond recognition and sent me scampering away with my tail in-between my legs. I was deflated. There was more life in an Egyptian mummy. I wasted away that afternoon still stunned by the ordeal.

It was a new year and I had new spirits. I had begun working in a new organization and the origami had grown so much thanks to Ms. Miriam Mukasa and Mr. William Gilbert of AfricaTalentBank. I had invented a few designs of my own and boasted to have graced big events in Nairobi. I had forgotten the past ordeal until I received a phone-call from my former work-place. It was Mercy, the secretary. I was glad to hear from her. I had a cheque to pick from her. That was not the reason she called though. She let me know that someone had been looking for me. The CEO of a design company. The same design company. The same CEO. The man who had ripped my heart to shreds and left me for dead. What did he want? I wanted nothing to do with him. Not so for him however. He asked me to call him. I texted him instead. He called back.

What ensued was the most awkward phone conversation in my life. The man began by noting how he had not seen me around the premises this year. He went on to ask how I was doing and if I liked my new job. I answered him, very skeptical. What did he want? The bush was now without leaves. He had beat about it so much that it cried for him to get to the point. He did.

“The last time we met, you were to bring me some origami designs but you didn’t come.”

What goes around comes around. Here was the opportunity to give the man a full dosage of what he deserved. I could have begun an eternal verbal onslaught and he would have taken it in. I could have declined and cost him lots of money. I could have contacted the client company and designed the logo for them and gotten the money instead. But I didn’t. He had taken my pride. He had taken my ego. But I wouldn’t let him take my dignity. I agreed to help him. I met him the next day and to his great demise or surprise I had the design the company needed. He drowned in his shame. The same office that had me a victim ushered me in a victor. I won his respect and I too learned an important lesson. The cloth that you cast away today, may be the garment that will keep you warm tomorrow.