The world is starving, hungry for a breed of men that will chart the course that generations will emulate. The dire need for men who will blaze new trails in unknown territories is at its zenith.

The world craves dreamers. Men who can dare to cast a vision for their lives. The world craves pioneers who fear not for they see the future. They believe, they perceive and they are sensitive to the power of Christ Jesus leading them. The world craves the likes of father Abraham, living not by what they see but by what they perceive. But alas! The world desires not dreamers without action. The difference lies in their pursuit of those dreams. If you are a dreamer, you need to know that as long as we see nothing in action, you fall in the category of a rock, tree and wall. Ambition without direction! The world requires more that your grand ideas and fashionable speech. Countless men have told the women in their lives how they have the grand idea of making things run like clockwork. They stand above the rest but only as long as time allows. The jaws start squeaking and the hearts are broken. Dreams not followed. Words not actualized and promises not kept. Let’s face it, even if we were as tough as Bruno and came from Mars we will never catch grenades for anyone or stand in front of any train. The world craves dreamers all right…dreamers with action.

The world craves heroes; men who save the day even if they are not recognized. There is a reason why the masked vigilantes in comic books who stop diabolical plans are called heroes. They do it selflessly. It could even cost their lives but it matters not. They are the heroes, seen or unseen. The analogy from a comic sounds ideal because it is what the world really craves for. Men who swear to their own hurt and give sacrificially. Men who endeavour to use their gifts for the good of mankind and to serve others. Men who give up their comfort so that others may prosper. Men who sacrifice their time and their money. But alas! The world desires not heroes without character; men irresponsible in their speech, disciplines and commitments. Heroes without character perish and nobody wants to be around them when their sins find them out. You cannot keep a man with character down and neither can you uphold a man without character. The world craves more.

The world craves warriors; men who fight for what is good and what is right! Men who stand up to defy the odds. Men who will not stand as their sisters, daughters and wives are misused, abused and confused by a provoking world! Men who stand by their word and do not budge to the threats of facing trouble for doing what’s right. But alas! The world desires not warriors without knowledge from the Word of GOD. Such men are perishing despite their battle prowess. Men championing and fighting without their heads in the word of God are not warrior to last. The rapid degeneration of society isn’t news. Championing for morality and what Christ says is called insensitive. It isn’t the cool way to go so we’d rather blend in. But the world needs men to stand by the words of Jesus and call sin, sin. For the sake of the children and for the sake of eternity. For the sake of the ones rolling their eyes as they read this because these words will come alive in time. You can tell a warrior without knowledge. Folly loves violence. All will be justified with time. The bang of a mallet will no longer decide morality. The words “human rights” will no longer determine what’s right. And our lives will no longer be our lives to do as we please. A moral compass established by the words of a supreme one God will. The words of Christ Jesus!

Blessed will be the dreamer with an action, the hero with character and the warrior with knowledge. The world craves such men. 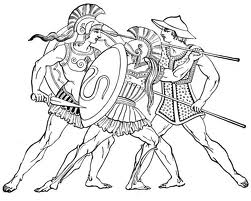