Latest
Search
My Account   Checkout   Shopping Cart
HomeFiction
By Ernest Wamboye on June 26, 2014 Fiction Relationships
Darkness is a sequel to part one, titled “She”. Read “She” here.
Darkness

The man and the woman had been walking for nearly three hours. The woman lagged behind. Her feet were sore and her calves were burning with every step she took. Still, she kept going because he wouldn’t stop. The man looked strong enough to keep walking for two days. His muscles tightened with every step across the rugged terrain. The ground in this part of the land was different. It was not as beautiful as where they came from. It seemed to rebel against the beautiful environment. It was full of briars, thorns and thistles. A few metres ahead was the forest, west of the Euphrates river. None of them had ventured this far before. When the man finally stopped for the first time, the woman dropped to the ground relieved. She needed a rest. He angled his head slightly to catch a glimpse of her from the corner of his eye. He despised her. He wanted nothing to do with her. The sight of her was putrefying.

He noticed she was looking back at him. Past the long ebony black hair along her temples were equally sinister eyes. She loathed him. She was burning with rage towards him. Could he not see that she was tired? Could he not realise that her body could no longer take a step farther? Was he always this inconsiderate yet she did not know? As soon as they settled, she would have a plan. Leave the man. Get as far away from him as possible.

“Get up,” the man said. The ice in his tone was plain. The look on his face said that he knew it was. “It’s almost dusk, we need to find a shalom.”

She stared at him, incredulous. Was he serious?

“I’m not going anywhere,” she replied matching his nasty inflection. “You should have thought about that before losing our home.”

He let her poisonous words sink like a dagger. He said nothing. His thoughts murdered her. She was not worth replying.

“I can’t believe you told him I was responsible,” she continued. She shook her head in disbelief and then she spat on the ground. She wished that the ground was his face so that he could feel her frustration. She wanted him to know the pain she felt. The man said nothing. He just stood there and said nothing.

“And I can’t believe that we lost everything we had. Could you not pack more?”

The man looked at the sack in his hand. Apart from a few choice fruits, it held nothing else but lots and lots of air. She saw him search for a response but knew she had him pinned.

“Plus, we can’t find a shalom, you lost the only one we had,” the woman added, not shifting her attacking stance.

Then suddenly, like an overdue volcano, the man erupted. He tossed the sack on the ground and marched towards her with blood shot eyes and clenching fists.

“You blame me, woman! You dare blame me!”

The woman did not expect his flare up but she figured she needed to remain in control to hurt him more.

“Yes!” she replied placidly, “I blame you Adam. You were meant to protect me but you failed. That’s all you are, a failure of humanity.”

“Protect you! Protect you from what, Eesha? From the witchcraft of that blasted serpent that you colluded with? You believed Severus!” He pointed a warning finger at her, “Don’t you dare make this my fault yet you tricked me into his sorcery with your harlotry. Who knows what spell you placed over me?”

Eesha laughed. She grabbed her belly and let out a deep sinister provocative laugh. It was so loud and full of spite, that Adam could almost feel it contort his face. She rose to her feet despite her aching feet and laughed some more.

“Stoppit!” he commanded, but it only encouraged her. He knew why she laughed. There was something wrong with him. He had started denying claims of basic facts and was lying even about what he knew to be true. He knew he was under no spell when she offered him the accursed fruit he was warned not to eat. He knew she was deceived. He knew his lack of moral tenacity made the situation worse. He knew they lost Eden because he listened to her. He knew it but he would not accept it. He was conflicted within himself. The thing he wanted to do, he did not and that which he did not want to he found himself doing. And so it was, that the man did not want to strike his wife but he did. His hand flew across her soft cheek and made a sharp clap that echoed in the trees above them. The woman staggered in horror as her frail frame lost balance and fell in a thicket of briars. As she crashed to the ground squealing in pain, he covered his hand over his mouth. His eyes widened at the realisation of his actions.

Adam realizing his folly,  placed his hands on his head in regret. His actions surprised him. He reached out to pull Eesha from the thorny bush but she wouldn’t let him. Her arms and legs were stripped with red. She was bleeding. Eesha pulled her hands against the briars that punctured her delicate skin. She was still assessing the fact that he had struck her. Surely, not him. It must have been a falling tree branch or something. But when she saw him hovering over her extending a hand of help and apologising profusely for his misdeed, the fact confirmed. She resisted Adam’s attempt to assist her. A boiling rage within her wanted to strike back. She folded her bleeding fists but a few briars stuck on her palm forced her to open them in pain. He reached for her palms and pulled out a few briars. When she regained composure, she opened her mouth to say the vilest things her mind had ever imagined. But he mouth did not cooperate with her thoughts. Instead of abuse, came out a whimper. She fell to her knees and began to sob loudly. Adam was ridden with guilt. He fell to his knees to comfort her. Eesha, noticing her husband’s attempt to make peace, jerked him away with all the energy her body could muster. She then picked herself up and ran past him into the dark forest ahead.

Fine, let her go! She deserves to be disciplined anyway! 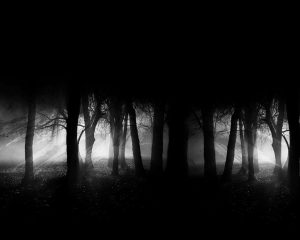 Close to three hours passed and Eesha did not return. The sun began to set and Adam decided to pitch camp for the evening. The night wind was brutal. It was unusually cold and the shadows in the twilight were unusually dark. He lit a fire to keep himself warm and to scatter the scary shadows. The man sighed heavily as he pulled a few fruits from the sack to feast on. He barely ate one. His mind troubled him. He was concerned for Eesha. He bowed to the pressure of self-pity and began to blame himself amidst sobs and curses. He desired death. What had he done? And before he contemplated it a second further, he felt a warm hand behind his shoulder. He felt brief ecstatic joy at the thought of Eesha having returned. He whirled in anticipation and came face to face with someone else- a man in a radiant white tunic.

“Lord, I am so sorry,” Adam said falling prostrate.

“What is done is done. It shall be atoned for, beloved. Go, find your wife. She’s in grave danger.”

“What?” he asked. Adam tried processing what the Lord said. Atonement. Could his error be reversed? Could they return home. But then something else stole his mind’s attention. The last part of his sentence about Eesha being in danger. He dried his tears and jumped to his sturdy feet.

“What kind of danger?”

“The Leopards are friendly; they’ve always been.”

“The curse has changed them, Beloved. They will maul Eesha and she will die, Adam.”

Then he was gone. Adam looked around. He was alone. But he knew that the love of his life was in trouble. He could feel it like a deep pit in the stomach. They were one. Her pain was his pain. Adam, picked a stick of fire from the flames, and ventured into the dark forest to rescue his bride from the darkness.

Previous ArticleShe
Next Article The day I got drunk!